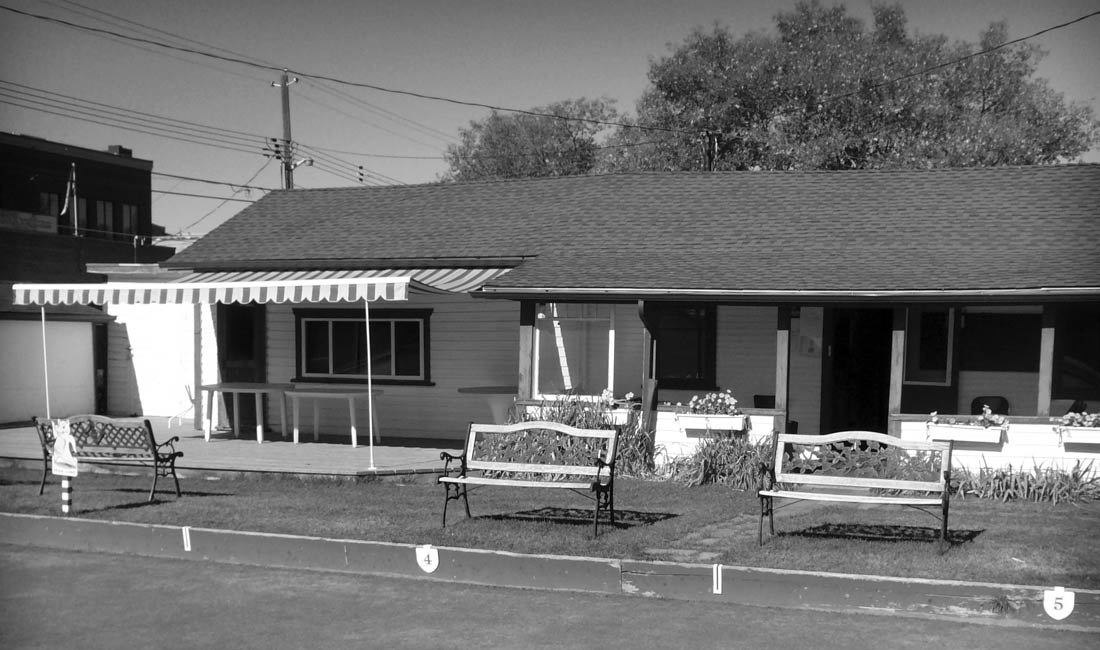 The patch of green grass in front of the white building with the steel roof and covered deck, situated on the corner of 8th Ave. and 12th St. S.E., holds a lot of Inglewood history.

The Inglewood Lawn Bowling Club had its beginning as The Chinook Club on Homer Gay’s back lot in Calgary’s Alyth Shops area. This was the result of the group of CPR employees who decided that they needed something to provide exercise and entertainment in their off-duty hours, without going across town to find it. Their original clubhouse was an old garage at the end of the lot.

They finally outgrew the Aylith Shop’s “back-lot greens” and worked together to build a new clubhouse at the Club’s present location. Mrs. A.E. Cross and family supplied the property, Ed Jeffries the sand and gravel, and Western Steel, through Percy Ward, the pipe for outdoor lighting. There were also a local charitable organisation called the OddFellows who contributed manpower, among many more members and volunteers.

With considerable help the foundation of the green itself was prepared. Alternating layers of different types of gravel and sand were brought in and carefully spread; and then the area was topped with soil and grass seed after some weeks of grass growth, there it was; our new bowling green, just waiting to settle.

The result of all this labour and goodwill has given us greens that are comparable to any in the city. In fact, for drainage efficiency, ours is probably the best. After a very heavy shower, the grass is ready to be played on in about15 minutes, despite more than 50 years of settling and regular use.

The club officially became the Inglewood Bowling Club in 1946. The north half of the original wood-frame clubhouse was built about this time, all with hand labour and willing hearts. Over the years besides becoming a much loved “Inglewood Institution” it has grown to have the largest lawn-bowling membership in Calgary, a trend we would like to see continue well into the future.

Despite the colourful heritage of the club, the sport of lawn bowling started to decline in popularity and membership numbers began to drop through the late 1970’ and 80’s.

But then the Inglewood Club (and the sport) was injected with new hope in 1996.

They considered themselves unlikely heroes, but four Calgary firefighters found themselves front and center in the challenge to rejuvenate the Inglewood Lawn Bowling Club. Perry Prete, Gordon Dancer, Gary Hewitt, and Dave Orr say they stumbled onto the problem which faced the lawn bowling club in 1996, while searching for a centrally located lawn bowling facility where they could practice their sport for the upcoming Police/Firefighter Games. Inglewood fit the bill as far as location; however, they soon discovered the clubhouse was severely ailing and the membership in decline. They were quickly installed on the club’s executive board with Perry as president, Gary and Dave forming the financial committee and Gord taking over as greens-keeper.

“Things are buzzing at the Inglewood Lawn Bowling Club these days. There are new renovations, new members, and there’s a new atmosphere,” said Perry Prete in 1997. “The new membership list jumped as a result of an Employee Appreciation Day organized by two local companies. They enjoyed themselves so much at their teambuilding event that they all joined the Club and formed a corporate bowling league. This is a sport for all ages and for all family members. It’s a sport where a 12-year-old can beat his dad.”

The new members that Perry referred to formed the Inglewood Fraternity of the Bowls and Cups (IFBC) and took on some of the positions of the executive board of the club after Perry’s term ended in 1998.

There were many welcome changes to the original clubhouse as well. Built in 1946 as a temporary shelter, it had somehow managed to stay together, but was in a state of disrepair. With the help from Perry’s group and the IFBC, the building’s foundation, which had consisted of railway ties, was upgraded, along with the interior. Volunteers installed new plumbing, new wiring, new flooring and a new kitchen. The new Wednesday night IFBC league even captured the imagination of the local media who ran a couple of articles on the “new” trend in corporate sports leagues.

From there word spread quickly, and as a result of the newfound enthusiasm for lawn-bowling, there are now three separate leagues that call the Inglewood Lawn Bowling Club home: The Inglewood Fraternity of the Bowls and Cups, The Drop-In and Seniors League, and The Apollo League.

The newly renovated, vintage clubhouse became the center of club activities, and upon completion an aggressive rental program was initiated for corporate or community functions.

The ILBC league members in particular proved not only to be keen bowlers, but also have taken an active interest in keeping the Inglewood Lawn Bowling Club looking its best, either by their own physical labour or with funds raised through volunteer activities. In the summer of 2003 they and senior members volunteered at a casino to raise thousands of dollars for club upkeep and the eventual replacement of the original “summer-only” clubhouse.

Nearly ten years later, in 2013 the club executive began the process of replacing the old clubhouse with a new, modern “all-season” facility that would be able to serve lawn-bowlers and the community for years to come. Designed by Nyhoff Architecture Inc. and built by Peterbuilt Homes Ltd., the new clubhouse was opened for members and guests use in spring of 2015.

Whether on league nights, at Calgary interclub jitneys, Corporate Team-Building sessions, or for special events, we’re proud to keep the sport of lawn-bowling “alive and rolling.”

The club now has almost 200 registered members, and that along with weekly drop-ins and club rentals makes it one of the largest and most active lawn bowling clubs in the City of Calgary.

We are very grateful to the four men who began the process that saved our club, and to the Club’s successive Executive Board, our members and volunteers and Corporate sponsors who keep it growing and thriving.

Catering for your event 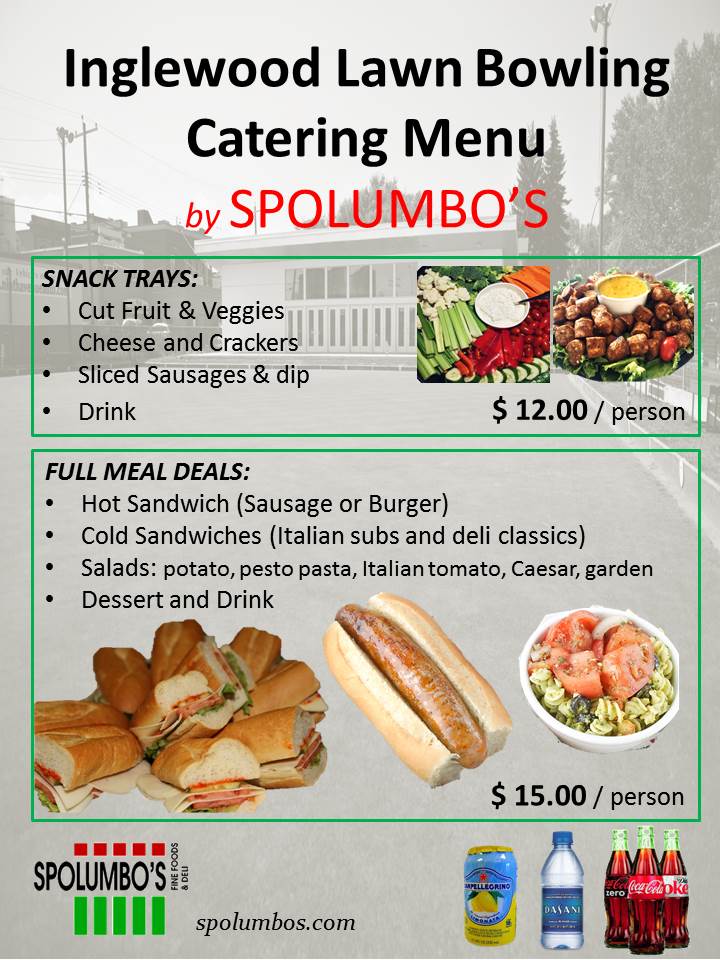 When booking your rental you can request that Spolumbo's contact you to discuss catering options.

Scroll back to top